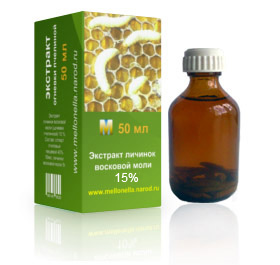 PREMIUM quality – thoroughly prepared tincture of wax moth.
The possessed knowledge backed by more than 40year experience in beekeeping and strict adherence to technology and work hygiene ensure the highest quality of this product.
The tincture of wax moth is prepared by an ancestral beekeeper Volodymyr Stefanyshyn, who makes the tincture of wax moth since 2008 and has cured already many patients from severe forms of tuberculosis and other illnesses.
Net amount: 50 ml.
Price:
Sale: $3 / 50ml bottle

Tincture of wax moth can be ordered via email medperga@gmail.com

How can tincture of wax moth fight mycobacterium tuberculosis and other pulmonary diseases?

Wax moth (mellonella) is used for the preparation of many pharmaceutical drugs. Without checking these drugs could not get into the chemist shops. This is proof that the wax moth has a therapeutic effect on the human body.

Therapeutic effect of wax moth tinkture was confirmed in practice by Russian scientist and Nobel laureate Mechnikov I.I. and doctor Mukhin S.A, who cured himself from tuberculosis using tinkture of wax moth.

Mechnikov I.I. proposed scientific hypothesis that many pathogenic viruses and bacteria have a protective shell, which in its properties resembles wax that is resistant to chemical attack. Digestive enzymes of wax moth break down wax, which is food for it. A similar effect are disease-causing viruses and bacteria exposed to as well. As a result – they become harmless.

Advantages of using of tincture of wax moth for the treatment of pulmonary diseases:
- lack of toxicity;
- high efficiency;
- lack of pharmacological and medical risk;
- compatibility when used with pharmacological agents;
- stability during storage (can be stored up to five years).

Real life story: Sergei, retired. Diagnosis: open form of tuberculosis. Doctors appointed an operation to remove a lung at the Institute named after Bogomolets in Kyiv, Ukraine. The situation was serious. His wife called me for help. We met in the subway. She cried and described the situation. She loves him. Love and support is very important when one spouse has a problem with his health. They bought all the drugs that are listed in the article «Tuberculosis» (see Russian website translation). The treatment lasted for six months. The result of the treatment: after a month of treatment mycobacterium tuberculosis disappeared. In the beginning there were jumps in body temperature, which became normal later on. Both lungs are healthy now. In that lung, which had to be cut during operation, – no operation was needed, and now the wounds and scars are healed. The state of health is satisfactory. In a conversation on the phone they said «sorry that we did not address you earlier.»